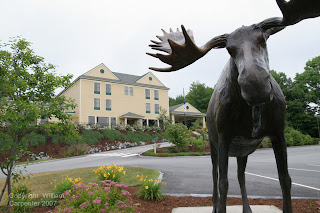 The flight to Boston went well. Got to the airport in plenty of time and got to use the new shoe scanner in the Clear line. Sat next to a nice couple from Palm Coast who were going to Boston to visit her mother on her 88th birthday 7/7/07. The baggage pickup took longer than expected since Airtran has just one small carousel in Boston.
Picked up my Avis rental and got out of Boston and onto I-95 without any trouble. Light rain most of the way. I arrived at the Freeport Hampton Inn a little before 8:00, the Moose above was there to greet me.
The girl at the front desk suggested Gritty's for food and beer. The home brewed beer was excellent, the food unremarkable. I asked two guys next to me at the bar when the fireworks started and was told 9:00 or a little later as was the custom. The barmaid gave me 50% off my quesadillas because I said I didn't like them, so I upped her tip. Went back to the motel, got my hat and rain jacket, and headed for town.
A sign directed me to park in the LL Bean corporate parking lot. The fireworks started as I got out of the car. As I walked toward the center of town, I watched the fireworks on the way. I got there about 15 minutes later just as the finale started.
After the fireworks were over, someone suggested ice cream. That sounded good to me so I went to the Ben & Jerry's and got a waffle cone special with double Cherry Garcia. I sat in front of LL Bean's waterfall fountain with a local couple watching the people walk by and the traffic gridlock. After finishing Cherry Garcia, I walked around a little more. It started raining harder, the sidewalks cleared leaving long lines of cars headed home. I walked back to the parking lot in the rain, thankful for the foresight to get my rain jacket.
Posted by Pack Rat Bill at 9:50 AM

Email ThisBlogThis!Share to TwitterShare to FacebookShare to Pinterest
Labels: Maine