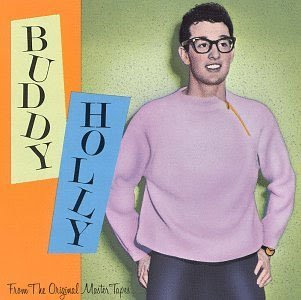 A new Buddy Holly collection has been issued that includes some of his private recordings done in the last year of his life. The collection was reviewed on Fresh Air this afternoon. I was deeply moved hearing the review, not only because of the thought of being able to hear previously unreleased material, but also because of the large part Buddy Holly played in my musical life.
He was at the peak of his popularity when I was in high school, and he was killed the year I graduated. I have several of his albums, vinyl LPs, that I still get out and play occasionally. I also have "Best Of" collections on CD. My favorite song is Not Fade Away, an affection I apparently share with a majority of his fans. I have never tired of hearing his music. His was an incredible talent.
The Fresh Air reviewer, Ed Ward, pointed out that Buddy was trying a lot of different things in his latest recordings. Ed wants us to imagine what Buddy would have become if he hadn't been in that plane that night. I would hope he would have gone down new paths and gotten better and better like John McCarthy of the Beatles or Ray Charles. But there's always the possibility that he could have taken a different road like Elvis did. As tragic as Buddy's death was, it has served to immortalize him as he was at his peak. His life and his musical career were cut off, but his death also prevented any diminution of his legend. Buddy Holly lives on in my memory just as he was when he died in 1959.
This year will see my 50th high school class reunion, and I'll be looking forward to hearing Buddy's music, a part of all which we were back in high school. A part that hasn't and won't change. There's some irony in the title of his famous song. The memory of Buddy Holly will "Not Fade Away".
Posted by Pack Rat Bill at 8:43 PM No comments: 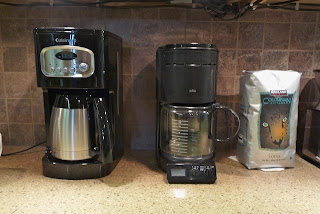 On the right is the old Braun coffee maker we've had for over a decade. On the left is the new Cuisinart we purchased to replace it. The Braun had been showing signs of age the last couple of years, and a couple of weeks ago the heating element gave out in the middle of making essential morning coffee. I finished the process by pouring hot water directly onto the coffee grounds and then closing the coffee holder to let the water seep through.
Now I had to face the daunting prospect of replacing the Braun. A couple of years ago I had tried to replace it when it started showing its age, but after trying out three different makers, decided I couldn't do any better than the Braun. So I cleaned it again and kept using it. Now I had no choice but to find a replacement.
Consumer Reports didn't even list the Braun, so right away I was confused. I'd had such good luck with mine, why wasn't it listed? I went to Google. I found my Braun was still listed for sale. I tried to buy it through Amazon.com but when I got to the checkout, it said zero were available and I was asking for one. I went up to the next model. Still no one had any inventory. I checked the Braun website. They pointed me to dealers with nothing but shavers and hair dryers. I finally came to the conclusion that Braun coffee makers are not available to us here in the States, at least not now.
Back to Consumer Reports. I ended up buying a Cuisinart which is the same as the top rated model but has a thermal carafe. I have to say I like it a lot. But as you can see, the Braun is still on the counter. I don't know when I'll have the courage to put it in the trash. It's like a pet that you have to take to the vet to be "put to sleep". You postpone it until you can't any longer.
However I'm liking the new Cuisinart more and more every day. I don't think it will be long before the old Braun hits the trash can and joins it's siblings in coffee maker heaven. But it won't be without a proper memorial ceremony. So long faithful Braun. Many fine cups of coffee were enjoyed thanks to you old friend.
Posted by Pack Rat Bill at 7:51 AM No comments: 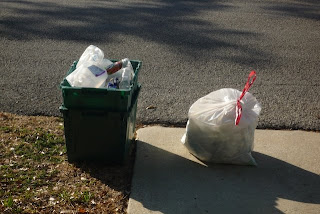 I put out for pickup on Friday. On the left are two recycling bins containing paper of all kinds, cardboard, cans, and plastic bottles. The volume of recyclables is greater than the amount of trash or solid waste. I've been looking forward to the day I could say this, and it's a milestone I'm proud to have achieved.

It didn't come easily. I had to set up a system to collect all the paper that could be recycled. Then I had to do the same for all the cans. The cardboard boxes like those used for breakfast cereal were next. They are collected and broken down so they're flat. I crush all the plastic bottles and cans I can to make them all fit in the recycling container. Finally, it helps to drink enough beer to provide cans enough to make a difference.

With this system in place and the family members all properly trained, I'm hoping there will be many more days like Friday where solid waste is less than recyclables.

Let me know if you have solid waste less than recyclables days.
Posted by Pack Rat Bill at 7:13 AM No comments: 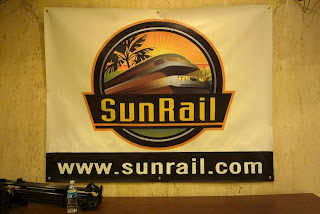 It's been a long time since my last post. No apologies. I just knew I couldn't compete with Al Kaplan http://thepriceofsilver.blogspot.com/ who was doing one photo and post every day for years and years. Now that he's slacked off a bit, I feel like there's room for me.

SunRail - Central Florida's Commuter Rail.
This is a very worthwhile project that needs approval by the Florida Legislature this session. I won't go into the dollars and details. There are lots of places to read about those. There are three simple reasons it deserves to get done:
Check out this website: BeforeSunRail.com

Then contact your Senators and Representative and tell them to vote for SunRail. Your children and grandchildren will thank you.
Posted by Pack Rat Bill at 9:17 PM No comments: