St Pete and the RRFB 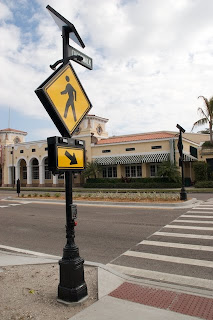 Color me green, with envy, that is.  Tuesday I visited St. Petersburg with Mighk Wilson and Keri Caffrey.  Keri and I were tagging along with Mighk whose purpose was to check out installations of the RRFB, Rectangular Rapid Flashing Beacon, on pedestrian crosswalks.  The envy part came about when I saw just how pedestrian friendly St. Pete is, and the level of commitment the Sunshine City has to becoming even friendlier to the lowly pedestrian, the lowest member of the transportation food chain.

I knew St. Pete had a reputation for being pedestrian and bicycle friendly, and I had experienced some of it first hand, but after spending time with our friendly host, Michael Frederick, I learned the breadth and depth of the city’s commitment.  Michael is the Manager, Neighborhood Transportation, and has been instrumental in formulating and implementing the city’s bicycle and pedestrian plan,  Since the start of implementation in 2003, bicycle and pedestrian crashes have declined steadily while usage increased.  St. Pete has installed pedestrian crosswalks, created bike lanes, and rebuilt streets incorporating traffic calming in hundreds of locations throughout the city.  Crosswalk enforcement was funded and has been key to obtaining high driver compliance with un-signalized crosswalks.  Each city neighborhood has its own traffic plan that is approved by the residents.  The city’s proactive approach and thorough planning process have enabled it to obtain funding to move ahead aggressively with its plan which is near completion.  Overall very impressive and envy inducing for a Metro Orlandian living in the most dangerous place to walk in the country.

But back to the purpose of today’s visit.  As you can see from the photograph, the RRFB is a rapidly flashing amber strobe crosswalk signal placed just above driver eye level.  The signal is activated by a pedestrian pressing a button at the crosswalk entrance.  With most installations the signal begins immediately, although it can be coordinated with adjacent traffic signals if desired.  Driver compliance levels, that is drivers yielding to pedestrians in crosswalks with the RRFB, is high.  The installations we observed were very impressive.  I couldn’t suppress a big grin when traffic actually slowed and stopped after I pressed the button and stepped into the crosswalk at the installation on 4th Street.  You can see a video of me skipping across the street here.  This device looks very promising for use in Metro Orlando. 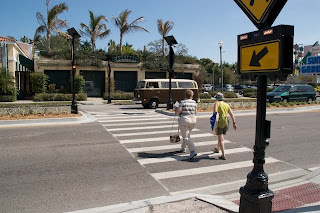 We’ll be discussing pedestrian safety Wednesday morning at the Citizen’s Advisory Committee at Metroplan Orlando, and it will be discussed also at the Bicycle and Pedestrian Advisory Committee meeting in the afternoon.  I hope to have more stuff and progress to report on this important subject in the future.  In the meantime, become a pedestrian safety advocate and let us know your ideas for making Metro Orlando a safer place to walk.

Metroplan Orlando held a pedestrian safety workshop yesterday. The attendance and enthusiasm was very encouraging. The board room was filled to capacity with more attendees than expected. Many different disciplines and organizations were represented, all with the same goal of enhancing pedestrian safety in Metro Orlando.

Presenters included Bill Segal, Metroplan Orlando Board Chairman, Mighk Wilson, Metroplan Orlando, and Sara Issac, a strategist with Salter-Mitchell. After Mighk explained the need, Sara Issac gave a short presentation and led a discussion on what the key problems were, what behaviors were behind the problems, and who would be the target audience for any social media to change behavior.

There were many ideas volunteered by the attendees. Since most of the pedestrian crashes occur along Lynx transit routes, it was thought transit riders provided a good target audience for pedestrian behavior changes, such as using crosswalks properly and crossing streets carefully. In addition, there are many existing ways to reach this group through Lynx ads, signage and literature. The group identified transients as another target audience because of the high rate at which this group is involved in crashes. However, no good strategy for reaching this group and effecting behavior change was put forward. This group, however, will benefit from more pedestrian-friendly streets as they become more prevalent in the future.