The Case for a Six Lane Moratorium 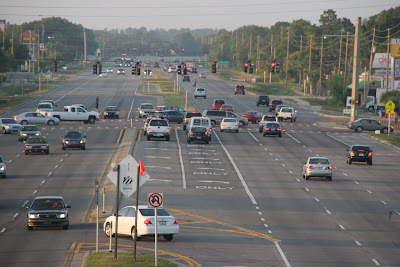 The last two years have brought unprecedented change to the nation and to Central Florida. The financial crisis virtually dried up credit. This caused the housing bubble to burst putting Florida's housing industry sales into free fall. Unemployment, foreclosures and outmigration rippled through the economy. And for the first time since the end of World War II, Florida's population declined. Oil and gasoline prices fluctuated wildly which caused drivers to cut back driving, to stop buying gas guzzling trucks and SUVs, and to create long waiting lists for fuel sipping hybrids.

Traffic on our roads, interstates and toll roads declined. Money available for transportation improvements became scarcer as revenue from gas taxes declined. The federal government pumped massive amounts of money into the system to keep the economy from collapsing, with only a small portion making it to local transportation infrastructure improvements. Global climate change caused by man's activity, primarily the combustion of hydrocarbon fuels, became a reality for the majority of citizens who in turn looked to their political leaders for solutions. And the Greater Orlando area was cited in a national report as being the most pedestrian unfriendly metro area in the country. All these events and their repercussions created new and difficult issues for Central Florida transportation planners.

But these events have also fostered unique opportunities to improve transportation in Central Florida. Consider the positive aspects:

With less travel on our roads, more viable transportation alternatives, and public pressure to give the pedestrian a better break, transportation planners have the ability and franchise to devote more resources to more walkable streets and pedestrian safety.

Transportation planners and researchers have found out much about the relationship between the type of roads we build and pedestrian safety.

And the need to resort to widening roads as a routine response to congestion is being increasingly scrutinized as planners have found that:

The Metroplan Orlando 2030 Long Range Transportation Plan has as a desired outcome less growth in vehicle miles traveled by cars and trucks on our road system, and more use of transit and other alternative means of transportation. To accomplish this some of each of the following is required:

The immediate benefits of a moratorium would:

Turning challenges into opportunities frequently involves changing the paradigm or shifting emphasis to cause people to consider things in a new way. If the desired change features a common goal or focal point that the public can identify with and rally around, then change becomes easier to communicate and put into effect.

A moratorium on six lane roads in the Metro Orlando area would provide such a rallying point. The word moratorium itself communicates urgency and action. In this context it means to stop doing something in order to halt its deleterious effects, and to examine closely the tradeoffs between the benefits and harmful effects of the activity in order to determine whether to continue it in the future.

A moratorium on six lane roads will focus a spotlight on issues that heretofore have not had much public exposure and debate:

As with any rule there will be exceptions. Projects already underway that cannot be reasonably stopped would be allowed to continue. Projects in the pipeline that are deemed to be absolutely critical would be allowed to go forward. But the very act of examining and approving these exceptional projects will give greater insight into alternatives and to the criteria that should be used to evaluate future projects. The previous concept of build and ask questions later will be replaced with careful evaluation of need and alternatives before building.

The current environment of economic hardship, shortage of infrastructure funds, unconscionable pedestrian accident rate, global climate change, and the dawn of a new era for transit in Central Florida calls for bold and imaginative leadership. Imposing a six-lane moratorium now is one way to show such leadership, and will demonstrate that the leaders in Metro Orlando are serious about achieving Metroplan Orlando's transportation goals.